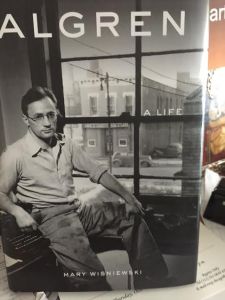 A few years ago, I saw Mary Wisniewski speak at one of those annual Nelson Algren Committee birthday celebrations that are nostalgically held at various locations in the old Polonia area of Chicago. An investigative reporter at Reuters at that time, and now a Chicago Tribune reporter, she spoke enthusiastically about a new Algren biography that she was working on. Now, Algren: A Life has just been published by Chicago Review Press, and it is the most definite biographical work on Algren since Bettina Drew’s Nelson Algren: A Life on the Wild Side came out in 1989.
I thought Drew’s biography lacked a genuine feel of Chicago’s people and neighborhoods. It was well written and informative, but you just knew that the author was an outsider. Not so with Mary Wisniewski, whose father Mitchell was raised in Chicago’s Polonia of the 1940s and the 1950s and who is quoted in her book responding to the Polish characters in Algren’s Never Come Morning as saying “I didn’t know anybody like that” and “Those people are bums.”
In fact, Algren was more of a caricaturist and myth-maker in his fiction than a realist. He was a creative genius in so many ways, yet his novels lacked coherent plots, often leaving his readers unsatisfied at the end. There is no doubt that Algren wrote with passion and commitment, but many times his stories just seemed to break down. Yet his prose essay Chicago: City on the Make remains one of the greatest books ever written about Chicago.
Wisniewski’s biography of Algren is truly a labor of love, written with great respect of the man, yet exposing his frailties and flaws. As a truly talented investigative reporter, she knew where to find local sources to bring out new insights into the already well- charted waters of Algren’s affair with Simone de Beauvoir, his financially disastrous dealings with Hollywood, and his addictive personality.
I wish that Wisniewski would have delved into Algren’s Jewish identity (or lack of) in more detail. How did it feel like for Algren to be a Jewish kid in his formative years growing up in a Catholic neighborhood on Chicago’s South Side? How did the adult Algren respond to the Holocaust and the establishment of the State of Israel?
Algren: A Life is one of the best biographies that I have read recently. Wisniewski really writes well and her research is presented in a crisp and most readable way. I highly recommend this book.

Next Saturday (March 28) marks the 106th anniversary of the birth of Nelson Algren. The Algren enthusiast here in Chicago can celebrate his birthday all day long. Beginning at 11:00 am, Algren’s book Never Come Morning, will be discussed at the Cliff Dwellers book club, meeting at 200 S. Michigan. Then one can head north to Lakeview (Algren would have hated the term “Wrigleyville”) and view Michael Caplan’s  fine documentary film, Algren, at the Music Box, located at 3733 N. Southport, at 2:00 pm, followed by a special birthday celebration. More festivities will take place that evening at the Bloomingdale Artists Building, 2418 W. Bloomingdale in Bucktown, where the Nelson Algren Committee will host Algren readings, music, and an homage to the love of Algren’s life, his very own “Frenchie,” Simone de Beauvoir.