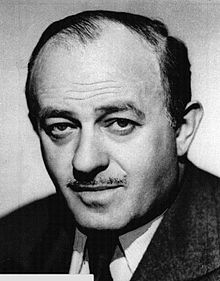 Kudos to Chicago actor and playwright James Sherman for finally creating a dramatic rendition of aspects in the life of the American writer Ben Hecht. Sherman is currently performing in The Ben Hecht Show, a one man play that he wrote, at the Piven Theatre in Evanston. The aspect of Hecht’s life that Sherman mostly focuses on is the writer’s Jewishness, especially in relation to his efforts to aid Jews during and after the Holocaust and to his role as the chief American supporter and propagandist of the Irgun, an organization of Jews using acts of terror to force the British out of Palestine preceding the establishment of the state of Israel.
Perhaps no twentieth century literary figure was as multi-faceted as Hecht, who was a journalist, playwright, novelist, short story writer, and most famously a movie script writer. Yet in watching Sherman’s play we don’t really grasp the scope of Hecht’s prodigious talent. Lacking also are personal details of his life, especially the importance of his wife Rose in the advancement of his career.
Since Sherman decided to focus on Hecht and the Irgun, I wish he would have probed deeper into Hecht’s outrageous condoning of the violent acts against the British that resulted in Parliament banning his film work in Britain for five years. The play also did not mention Hecht’s vitriolic hatred of David Ben Gurion and his Labor Zionist colleagues for their part in the sinking of the Irgun ship Altalena and their willingness to negotiate with the Nazis over the fate of the Hungarian Jews.
Still, Sherman did a credible job in capturing Hecht’s passion for his cause. He is a splendid actor who met the challenge of a one man play with good heart and gusto. And Sherman is to be thanked for introducing the Chicago theater audience to an important aspect of Hecht’s incredible life.

The Cliff Dwellers Book Club will be discussing Angela Jackson’s novel, Where I Must Go, when we next meet on Saturday, June 25, at 11:00 am. Ms. Jackson has graciously accepted our invitation to be there and participate in the discussion. Where I Must Go is a fictionalized account of the lives of a group of African American students at a major and prestigious university located on the lakefront just north of the city of Chicago boundary line in the turbulent times of the late 1960s.
The Cliff Dwellers is located at 200 South Michigan on the 22nd floor. The book discussion is free, and usually lasts about an hour. Many in the group stay for lunch and continue the conversation then. Please contact me at richardreeeder34@gmail.com if you plan to come.

Richard Cahan is the featured speaker at the Jewish Authors Series at Max and Benny’s on Monday evening, June 20. The program starts at 7:00 pm. Cahan will discuss his latest book, Richard Nickel: Dangerous Years—What He Saw and What He Wrote, which he co-authored with Michael Williams. The book relates the amazing story of Richard Nickel, the architectural photographer who many consider to be the founder of Chicago’s historic preservation movement. Max and Benny’s is located at 461 Waukegan Road in Northbrook. Please email me at richardreeder34@gmail.com if you plan on attending.