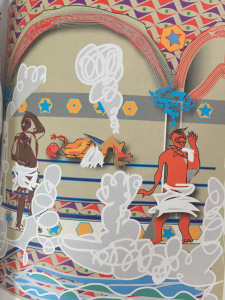 The Caref brothers were preparing the herring in anticipation of Schvitzmas that evening. Shelly, Willie and Benjie make it Russian-style, the way their late
dad Jake taught them. The brothers toast Jake with vodka shots as they get the herring ready. Jake was one of those legendary Red Army soldiers who gallantly fought the Nazis as they retreated from Stalingrad to Berlin.

Jake also taught his boys to love the schvitz, the traditional Russian and Turkish wet steam baths, so popular among Jewish immigrant men from Eastern Europe. Schvitz literally means sweat in Yiddish. As a kid, my father use to take me on occasional Sunday mornings to the Division Street or the Luxor baths on North Avenue.

Unless you experienced it yourself, it is hard to describe the calming effect from the heat at the schvitz. Your body detoxifies as your pores seem to open up. Muscles relax and… 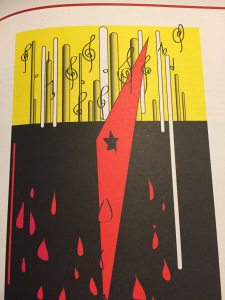 I had started my freshman year at Roosevelt University two months before in September, 1963.  Attending an urban university offered an opportunity to take in all the surrounding cultural activities.  I often found it possible to squeeze in a visit to an exhibit at the Art Institute or a concert at Orchestra Hall between my classes and my part-time job. Lately, I began going to Friday matinee concerts at Orchestra Hall on a regular basis to see the Chicago Symphony play.

My last class at Roosevelt on Friday ended at noon. The CSO concert began two hours later at 2:00. I usually had a bite to eat at the restaurant in the Fine Arts Building, and then walked the two blocks to Orchestra Hall. I liked to find a seat in the upper gallery at about 12:45. It was fairly quiet there and it allowed me a chance to catch… 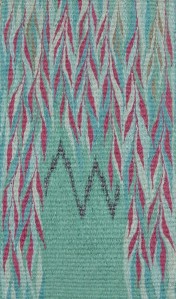 Berit Engen will be speaking and presenting some of her remarkable tapestries at Emanuel Congregation on Sunday morning, November 19, at 10:15, the weekend before the Thanksgiving holiday. These miniature tapestries were inspired by a musical setting to “Modim,” a Hebrew prayer of thanksgiving, that was composed by the Norwegian-born cantor Cavid Brandhandler. This event is free and open to the public. Emanuel is located at 5959 N. Sheridan Road in Chicago.
Berit who was born and raised in Oslo, Norway and began weaving as a child, and now she combines this ancient craft with the centuries-old tradition of expounding on Jewish texts, (in Hebrew, drash.) Her ongoing project, begun in 2007, consists, to date, of about 500 original pieces.
While referencing Jewish subject-matter, her pieces often display a Scandinavian sensibility, as found in Nordic nature, architecture and design. She compares her small-scale tapestries to Japanese Haiku: formally constrained by a miniature size – imagistic and focused, yet elusive.
Eighty-six of her tapestries were shown in a solo exhibition at the Spertus Institute in Chicago, 2012-2013. In 2015, she was selected to participate in the Midwest Jewish Arts Lab (MJAL), a one-year project of Chicago-based Jewish artists, organized by Spertus Institute and funded by the Covenant Foundation, fostering Jewish art and identity and culminating in the group exhibition, “Voices of Wisdom,” 2016-2017. Three tapestries are part of the permanent collection of the Chicago History Museum, and her “Woof and D’rash” project has been featured in Lilith magazine. She is a founding member of Jewish Artists Collaborative Chicago, (JACC).
A member of Oak Park Temple in Oak Park, Berit teaches children and adults Biblical Hebrew, prayers, and cantillation. 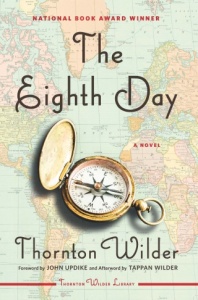 Thornton Wilder won the National Book Award for his novel, The Eighth Day, in 1967, forty years after his novel, The Bridge of San Luis Rey, won the Pulitzer Prize for fiction in 1927. In between those years, Wilder, the playwright, won Pulitzers for Our Town in 1938 and The Skin of Our Teeth in 1943. What a literary career!
The Newberry Library is celebrating the fiftieth anniversary and the new edition of The Eighth Day with a reception, actor readings and commentaries on the evening of Wednesday, November 15. The event is free and open to the public. The reception starts at 5 and the program begins at 6. There will even be an anniversary cake. Commentators include Tappan Wilder, the author’s nephew and literary executor; Jeremy McCarter, the co-author with Lin-Manuel Miranda of Hamilton; and Liesl Olson, the Director of Chicago Studies at the Newberry. And the Northlight Theater has cast actors Mike Nussbaum, Linda Kimbrough and B.J. Jones to read. It should be a very special evening.
Registration is required. You may register at https://www.newberry.org/11152017-chasing-wilder-chicago