I want to thank Devin Murphy, author of Tiny Americans and The Boat Runner, for what he wrote about my recently published novella. Here it is:

“An impeccably researched and imagined story. The Curious Odyssey of Rudolph Bloom delivers a choir of fascinating characters, piecing together shards of story that is larger than any of them can imagine. When Oscar Wilde and Bram Stoker discover the heart of the story, the rich life of Rudolph, they usher in the proper reverence. Richard Reeder has picked up Joyce’s famous story and delivered his own captivating myth.”

This is the lovely cover of my new novella, The Curious Odyssey of Rudolph Bloom, which will be released February 2, 2022, the centennial of the publication of James Joyce’s Ulysses. The book tells the story of the life and death of Rudolph Bloom, the father of Leopold. Rudolph had a most fascinating life, and thanks to literary luminaries Oscar Wilde and Bram Stoker, Rudolph’s most curious story is now revealed. It is the first ever prequel to Joyce’s Ulysses. Pre-orders are now available through my publisher Propertius Press. Just click on the link below and go to the CHECK OUT OUR LATEST BOOKS! box.

Kurt Meyer (holding the book), the President of the Hamlin Garland Society, paid a recent visit to the Cliff Dwellers Club. He met with Club President Carla Funk (on the right), Club Vice-President Joan Pantsios (on the left), and me, the Club Secretary (between Kurt and Carla). A portrait of Garland is behind us.

Hamlin Garland was a prominent American literary figure in the first three decades of the 20th Century. He won the Pulitzer Prize in 1922 for the biography, A Daughter of the Middle Border. He was one of the charter members of the Cliff Dwellers, and the Club’s first President.

An outcome of Kurt’s visit was an agreement to start planning programs at the Cliff Dwellers on the works and life of Garland in partnership with the Hamlin Garland Society.

Mary Wisniewski, the author of the outstanding biography “Algren: A Life,” will be our special guest for the Cliff Dwellers book club discussion of Algren’s “Chicago: City on the Make” on Saturday morning,  September 25th. It will be a virtual discussion, that begins at 11:00 A.M. and ends at Noon. If any of you are interested in joining this discussion, please contact me at richardreeder34@gmail.com, and I will send you the Zoom access information. 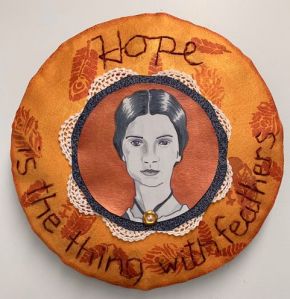 I never cease to be amazed when an artist can transform a mundane item into an objet  d’art. My very talented cousin, Harriet Winograd, has a created series of portraits of distinguished women painted on hubcaps. One is of the poet Emily Dickinson, featured on this post. Harriet has included the opening line and title of Dickinson’s poem “ Hope is the thing with feathers” on the hubcap as well. Here is the first stanza of the poem:

“Hope is the thing with feathers

That perches in the soul,

And sings the tune without words,

And never stops at all,

Thadious Davis is a Professor Emerita of English at the University of Pennsylvania. She is one of the leading Black scholars of the work of William Faulkner. She is the author of Faulkner’s “Negro”: Art and the Southern Context (1982), and Games of Property: Law, Race, Gender, and Faulkner’s Go Down Moses (2003). Here are two snippets from Faulkner’s “Negro” that I want to share with you:

“ Faulkner has created a mythical region out of his own imagination and his creative understanding of the South, her traditions and legacies. Since then he has scrutinized his created world and set it forth in minute detail which ultimately magnifies the most significant aspects of the human situation. His characters (the Sartorises, and Compsons, Dilsey and Nancy, the Sutpens and Snopeses alike)  are people caught in the act of life, and they are distinctly southern, not incidentally but by dint of his conscious, repeated design. His intense probing of the human condition urges the reader to interact imaginatively in translating the experience of the exposed people of the South into symbolic meaning.”

“Unfortunately, his (Faulkner’s) ‘ Negro’ has often received critical attention solely because of the sociological implications relating to southern society. The focus is on discovering Faulkner’s ‘real’ feelings or attitudes toward blacks, at the expense of viewing his people as characters. In addition, identifying Faulkner the Mississippian too closely with his individual characters or narrators has resulted in some hysterical and misleading writing on the race issue in his fiction.”

Ellen Blum Barish will be relaunching the popular Max and Benny’s author series on Monday evening, July 19. The series will be starting its 11th year. I will be in conversation with Ellen that evening as we discuss her recently published memoir, Seven Springs. The presentation begins at 7:00 PM. Seating is limited, so please make your reservation for the event at www.maxandbennys.com. 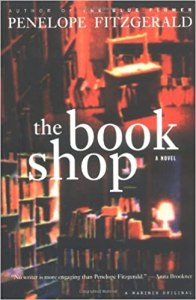 Penelope Fitzgerald’s novel, The Bookshop, is truly a delightful book. It tells the story of Florence Green, a World War Two widow, who opens a bookstore in a long-abandoned centuries-old house in a small town in Suffolk. It’s a tale of Florence’s courage to go ahead with the bookshop despite the opposition of the most powerful woman in town who had designs to make the ancient house a community arts center.

Fitzgerald believed that the world we live in is divided in her own words of “exterminators and exterminatees.” And the spunky Florence falls into the latter category, as the powerful Mrs. Gamart triumphs in the end. Yet her grace and tenacity in fighting the good fight to the end are inspiring.

Penelope Fitzgerald began her literary career rather late in life at age 58. Her first novel was published at age 60. She soon received literary recognition as her third novel, The Bookshop, was shortlisted for the Booker Prize in 1978. The following year, her novel Offshore, won the Booker Prize. Both these novels reflected true life experiences of the author, who had worked in a Suffolk bookshop and lived on a barge on the Thames.

CELEBRATE BLOOMSDAY 2021 IN THE CHICAGO AREA!

READ A FAVORITE PASSAGE OF YOURS FROM ULYSSES

MEET AND MINGLE WITH FELLOW BLOOMITES

LIMITED SEATING. YOU MIGHT WANT TO BRING A FOLDING CHAIR.

richardreeder34@gmail.com if you have questions.

Flann O’Brien’s The Dalkey Archive is a delightful book. O’Brien himself wrote to his editor that “the book is not meant to be a novel or anything of the kind but a study in derision, various writers with their styles, and sundry modes, attitudes and cults being the rats in the cage.”

The “study in derision” of the most interest to me was how James Joyce and Ulysses were mockingly depicted. The book’s protagonist, Mickey Shaughnessy, discovers Joyce working as a barman in the Irish coastal town of Skerries. The author had posted an obituary of himself, as he fled France before the Nazi occupation. The whereabouts of his family are unknown.

The dialogue between Shaughnessy and Joyce that ensues is purely wild literary phantasmagoria. Here are some tidbits of this madcap dialogue:

MS- “Mr Joyce, tell me about the writing of Ulysses.”

JJ- “I have heard more than enough about that dirty book, that collection of smut, but do not be heard saying that I had anything to do with it.”

JJ-  “I don’t want to talk about that exploit. I took the idea to be a sort of practical joke but didn’t know enough about it to suspect it might seriously injure my name. It began with an American lady in Paris by the name of Sylvia Beach…..the truth is that she fell in love with me. Fancy that!”

MS- “How did Miss Beach express her love for you?”

JJ- “She swore to me that she’d make me famous….But her plot was to have this thing named Ulysses concocted, secretly circulated and have the authorship ascribed to me.  Of course at first didn’t take the mad scheme seriously.”

MS- “But how did the thing progress?”

JJ- “I was shown bits of it in typescript. Artificial and laborious stuff, I thought….Of course it wasn’t Sylvia Beach who showed me those extracts.”

JJ- “Various low, dirty-minded ruffians who had been paid to put this material together. Muck-rakers, obscene poets, carnal pimps, sodomous sycophants, pedlars of the coloured lusts of fallen humanity. Please don’t ask me for names.”

MS- “Tell me more about Ulysses.”

JJ-“ I paid very little attention to it until one day I was given a piece from it about some woman in bed thinking the dirtiest thoughts that ever came into the human head. Pornography and filth and literary vomit, enough to make a blackguard of a Dublin cabman blush. I blessed myself and put the thing in the fire.”

MS- “Well was the complete Ulysses do you think  ever published?”

JJ- “I certainly hope not.”

MS- “ Mr. Joyce….I can tell you that you have been out of touch with things for a long time. The book Ulysses was published in Paris in 1922, with your name on the title page. And it was considered a great book.”

JJ- “God forgive you. Are you fooling me? I am getting on in years. Remember that.”

Mad stuff, isn’t it? Joyce then tells Shaughnessy that he wants to join the Jesuit order. Perhaps even teach at his alma mater, Clongowes Wood College. Joyce is intent on ridding the Holy Ghost from Catholic dogma.

The reader now wonders what’s up with Joyce. Has he gone mad like his daughter Lucia? Is he perhaps escaping the bonds of family for life with the Jesuits? If so, is this why he is brutally disparaging Ulysses.

The parody and satire of it all is brilliant. The Dalkey Archive is a gem of a book.